Latkes/ rosti are a staple in our house whenever anyone has to go out to work on Ekadasi or for a simple meal at home with a salad of cucumber, radish and olives. They would be a delicious addition to any farali (grain and bean-free) feast on a Vishnu-Tattva appearance day such as Sri Krishna Janmasthami -28.8.13- or in fact any time as a brunch. Instead of the traditional beaten egg, we have used a few ground almonds to hold the latkes together. The best potatoes to use seem to be the starchiest ones like baking potatoes, but our waxier homegrown  Red Duke of York are just as good, and tastier because they are organic.
There really is no need for a proper recipe, as these latkes are so simple to put together and you just adjust the quantities according to how many you want to make and your personal taste for the seasonings. Below the next picture you will find some instructions on how to make the latkes and the "sour cream": 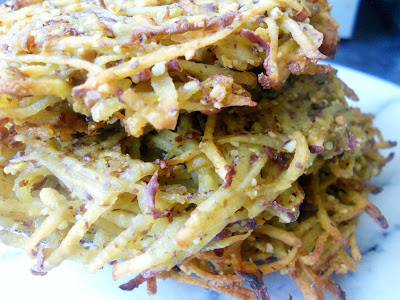 Latkes:
potatoes (about 1 medium-sized per latke)
a handful of ground almonds per 6-8 latkes (depending on size)
turmeric, seasalt and black pepper to taste
some olive oil for baking
Cashew Sour Cream:
This is really easy! Simply grind cashews finely and whizz up with enough water to make a thick, creamy paste. Then add a little salt and some lemon juice until you get the desired sourness. We added a little black pepper as well.

Serve the latkes hot from the oven with a generous dollop of cashew sour cream- yum! 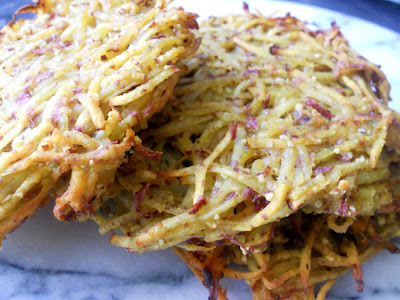 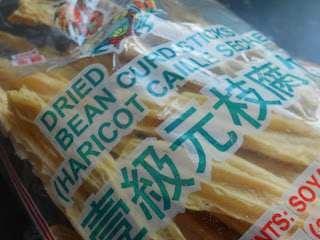